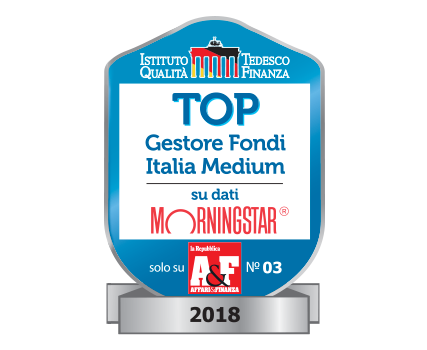 On 22 January 2018, L’Istituto Tedesco Qualità e Finanza (German Institute for Quality and Finance) – one of the European operators specialised in market surveys and comparative analysis of financial products, announced the asset management companies that have distinguished themselves for the quality of their offering. Kairos was declared TOP “Italia Medium” Fund Manager.

L’Istituto Tedesco Qualità e Finanza used the figures from Morningstar, a company focused on independent investment research, to compare open-ended funds in ten different categories, considered the most significant in Italy. The analysis is conducted on the basis of two criteria: the average annual return in the last five years (observation period: 16/11/2012-15/11/2017); the risk expressed by the maximum percentage loss in the last five years (“Max Drawdown”). By adding together the scores achieved by the asset management companies in the 10 categories analysed, we get the list of the best fund managers. All funds on sale in Italy (only retail categories) with a track record of at least 5 years and with a volume of at least Euro 7.5 million were considered.

This recognition for Kairos kicked off the new year in a positive way, and confirms the Group’s management quality.